Which helmet to take around the world
13. February 2017 by Lea Rieck in Gear

Choosing a helmet is a bit like choosing a motorcycle. It’s mainly about the fit and what you want to do with it – and big time about personal taste. You can ride around the world on every kind on motorcycle – and even more in every kind of helmet. I have to admit that I am not a huge fan of flip-up helmets and the only ones that I ever considered were hybrid-crosstouring helmets like the Shoei Hornet ADV, Arai Tour X4 oder Touratech Aventuro Carbon due to their bigger visor and view, space in front of the mouth and sun shield (I  barely wear sunglasses while driving so this is an important criterium for me). 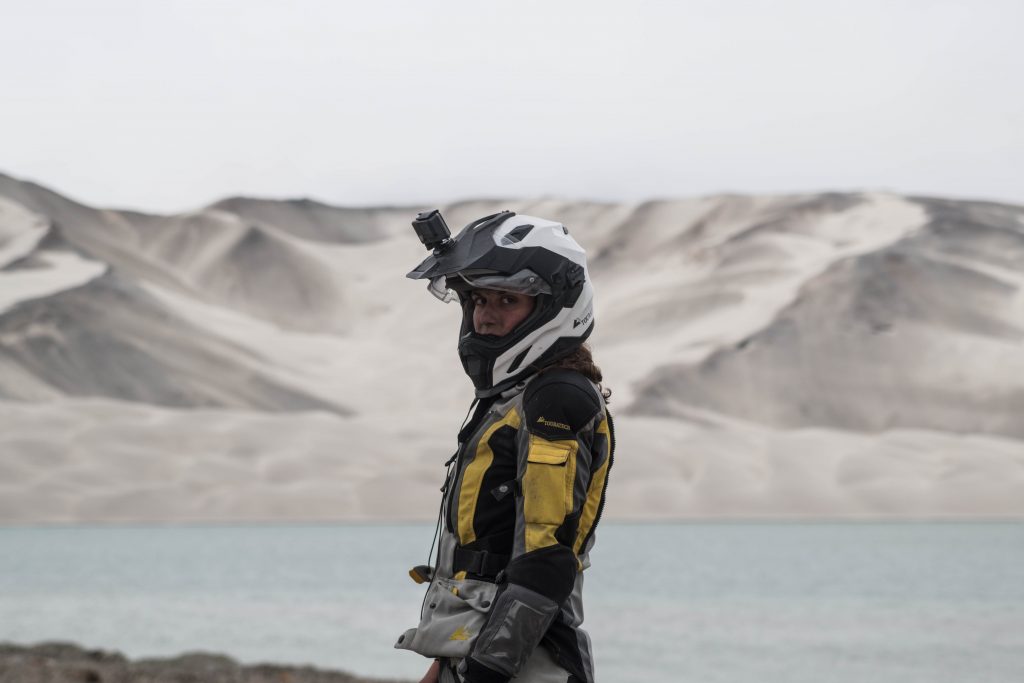 My very short helmet history started a bit more than two years ago when I took lessons for my motorcycle driving license (in Germany getting this license is a much more complicated procedure than in most other counties of this world). My driving school had a few different helmets and I tried nearly all of them during my lessons before I decided to finally buy my own helmet. Even before entering the motorcycle shops in Munich I knew exactly what I wanted. Or at least: Which brand I wanted. My object of desire was a Shoei helmet. I liked the sound of the brands name and my driving instructor (anno dato the only active motorcyclist I knew) was raving about it. I did a quick research which shop was selling this brand and found myself entering a motorcycle shop the first time in my life. This visit was as exciting as scary as disappointing. „I want to buy a Shoei helmet.“ I told the dangerously and grim looking assistant in the helmet section with all my confidence. “Which size? And which model?“ he answered harshly. „ Hmm…Maybe a size medium?“ He looked at me in doubt and handed over a helmet. „Too big!“ was his conclusion after I had it on my head only for a few seconds. „I think it’s comfortable…“ I mumbled into the helmet. He rolled his eyes and gave me another helmet in size S. „That one hurts. The size M was much better.“ Irritated the shop assistant looked at me. „ No way. Seems like Shoei is not made for your head.“ he said with an excusing smile. Without trying any other helmet I left the shop. „Not made for my head. How stupid. I will buy that size Medium helmet in another shop.“ I thought.

Of course I didn’t buy the not fitting Shoei helmet in the end. Instead I spent a few evenings after work in all different kind of motorcycle shops and tried all sorts of helmets they offered. After the highly recommended Schuberth helmets did fit my head not much better than the Shoei I finally found my helmet in the store Spätzünder. As soon as I tried the Arai Tour X4 I knew that this was my helmet. Compared to flip up helmets it had this huge visor and lots of space around mouth and chin. But when I looked at the price I had to grasp. 500 Euros for a helmet?!

I didn’t regret that I bought this helmet once. In one and a half years I drove nearly 45.000 kilometers with it on my head. And I was sure that I would never wear any other helmet because it seemed to be made for me. But then I tried the Touratech Aventuro Carbon and I had to admit, that there probably can be more than the one and only helmet in your life. 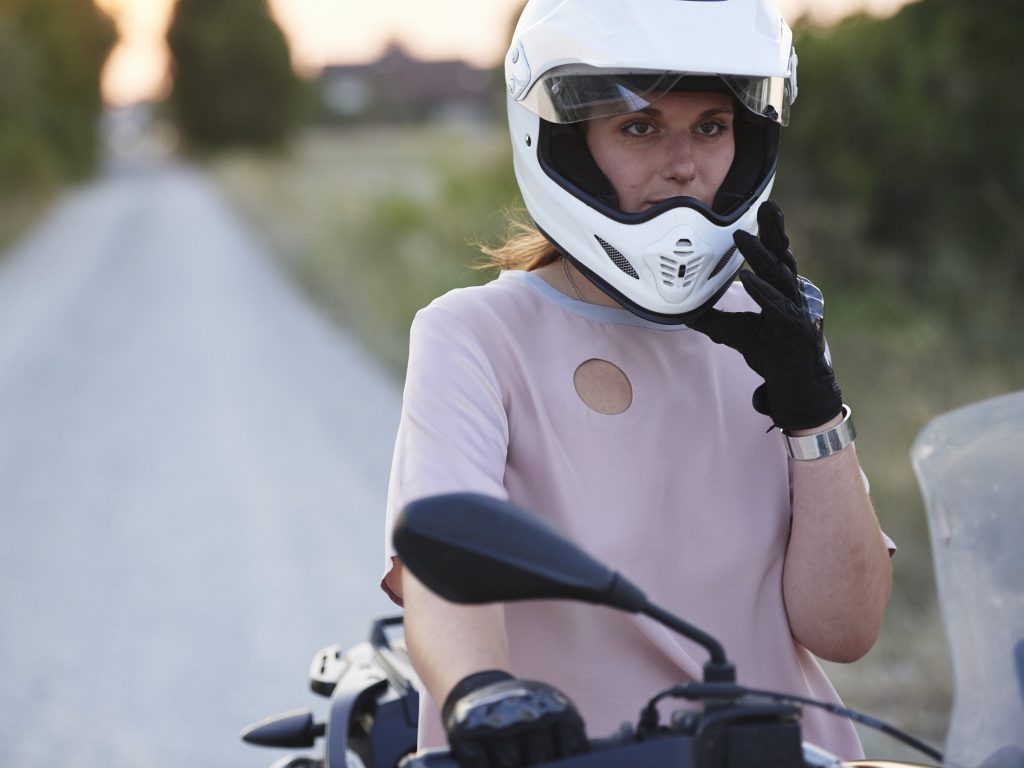 Outershell: Super Fibre Laminate
Interior: Replaceable/Washable
Ventilation: The ventilation is regulated through the mouthpart and top shell of the helmet
Versatile options: wear helmet with or without visor, with or without goggles, with or without peak.
Weight (Size S): 1740 grams
Price: About 500 Euros

Strenght: The Arai Tour X4 is without any doubt a top helmet of it’s segment. Compared to the Touratech Aventuro it is even less noisy in high speeds. One of my favorite things about the Arai helmet is it’s ventilation. You can close the mouthpart completely from the inside or regulate the strengths of the the airflow from outside. On top of the helmet the ventilation is easily controlled by opening and closing the holes with a little slider. It’s the smartest ventilation system I have seen so far.

Weakness: The biggest weakness is the weight of the Arai Tour X4. It’s slightly heavier than the Shoei Hornet ADV and much more heavy than the Touratech Aventuro Carbon. Another weakness compared to the Aventuro is the inlay. While the Aventuro was a bit tight in the beginning, it now still sits perfectly. After 30.000 kilometers I realized that the inlay of the Arai helmet was not as tight anymore. I probably would have bought a new one if I would have continued riding with the Arai Tour X4 as it got quite lose in the end. I had some problems with my visor and its pinlock (the anti fog lens that you put inside the visor). After driving in rain and humidity for hours there was slowly getting in some fog between the visor and pinlock. I changed my complete visor and pinlock once but had the same experience with the second one. One motorcyclist I met was talking about similar problems with his Arai helmet so I guess it’s just a weakness of this specific model if you wear it too long in extreme situations. I never experienced anything similar with the Aventuro.

Before I took off for my trip I visited the Touratech headquarter at Schwarzwald (Touratech is supporting me with their gear. Guys, thanks so much for that!). As I spent a whole day with them getting my bike equipped I tried on the Aventuro helmet at one point because I liked it’s Design so much. „It’s beautiful but I love my Arai helmet.“ I said. „Just try the Aventuro on your way home to Munich. If you don’t like it send it back to us.“ That’s what I did. And what can I say: I never changed back to my Arai helmet after this three hour ride.

Outershell: Carbon
Interior: Replaceable/Washable
Ventilation: The ventilation is regulated through the mouthpart and top shell of the helmet
Versatile options: wear helmet with or without visor, with or without goggles, with or without peak.
Weight (Size S): 1280/1380 grams
Price: About 500 Euros

Strenght: You can go up to 120 km/h without suffering too much from noise easily. I mostly drive with noise isolating in ear plugs so I don’t care too much about that fact anyways. The Adventuro Carbon is the most lightweight helmet in this section. If you compare it to the Arai Tour X4 it has nearly half a kilo less. You know how much half a kilo is? It’s a small bottle of coke, 5 bars of milka chocolate or a huge rib eye steak. And now imagine to wear that weight on your head for hours and hours and hours. Any more questions why I prefer the Touratech Adventuro? If yes here is another pro: The Aventuro is the best looking helmet in it’s segment. I would always chose a white helmet due to heat so I love that Touratech set a few black accents and finished it’s helmet in a quite edgy contemporary design. Even though I got really used to reduce my fashion demands to a minimum when it comes to functional riding gear I am quite happy that this helmet is as nice looking as it’s functional.

Weakness: The ventilation of the Aventuro is not as good adjustable as the one of the Arai Tour X 4. The Aventuro has a changeable open offroad mouthpart that I never use – otherwise the normal one only opens up on the sides. I mostly drive with glasses and a open visor so I have enough air flowing in anyways – but if I would drive more with closed visor I would probably wish more air to flow in through the normal mouthpart. Like the ventilation on top of the Arai helmet you can as well close the ones on the Touratech helmet by pushing the plastic forward. But I find it a bit more unhandy especially if having the peak over it. So I rarely close it. But even in heavy rain there was not too much water coming in so it’s not a big issue in the end.

The Aventuro Carbon is quite tight in the chin part when you try it the first time. But either mine got a bit wider during time or I just got used to it.

I drove 45.000 kilometers with the Arai X4 before I left to this trip and now used the Touratech Aventuro for more than 42.000 kilometers on a daily basis and in all weather and climate conditions. While the Arai is better in handling the ventilation the Adventuro wins big times when it comes to its weight. That’s why I would chose the Aventuro over the Arai Tour X 4 again and again. Especially on a trip like mine and on a long journey it is important to not put more weight on your body than necessary and relieve your neck and back that are exposed to so many outer forces like wind pressure anyways.